The European Commission on May 2 tabled what it described as a pragmatic, modern and long-term budget for 2021-2027.

In a statement, the Commission said the draft budget is an honest response to today’s reality in which Europe is expected to play a greater role in providing security and stability in an unstable world, at a time when Brexit will leave a sizeable gap in the EU’s budget.

“Today is an important moment for our Union. The new budget is an opportunity to shape our future as a new, ambitious Union of 27 bound together by solidarity,” said European Commission President Jean-Claude Juncker. “With today’s proposal we have put forward a pragmatic plan for how to do more with less. The economic wind in our sails gives us some breathing space but does not shelter us from having to make savings in some areas. We will ensure sound financial management through the first ever rule of law mechanism. This is what it means to act responsibly with our taxpayers’ money. The ball is now in the court of Parliament and Council. I strongly believe we should aim to have agreement before the European Parliament elections next year.”

According to Commissioner Günther H. Oettinger in charge of Budget and Human Resources, the budget proposal is about added value. “We invest even more in areas where one single member state cannot act alone or where it is more efficient to act together – be it research, migration, border control or defence. And we continue to finance traditional – but modernised – policies, such as Common Agricultural Policy and Cohesion Policy, because we all benefit from the high standard of our agricultural products and regions catching up economically.”

Overall, the Commission proposes a long-term budget of €1,135bn in commitments over the period from 2021 to 2027, equivalent to 1.11% of the EU27’s gross national income (GNI). This level of commitments translates into €1,105bn (or 1.08% of GNI) in payments. This includes the integration into the EU budget of the European Development Fund – the EU’s main tool for financing development cooperation with countries in Africa, the Caribbean and Pacific and which to date is an intergovernmental agreement.

To fund new and pressing priorities, current levels of funding will need to be increased. Investing now in areas such as research and innovation, young people, the digital economy, border management, security and defence will contribute to prosperity, sustainability and security in the future. For instance, the budget of Erasmus+ and the European Solidarity Corps will be doubled.

Meanwhile, the Commission has identified where savings can be made. It is proposing that funding for the Common Agricultural Policy and Cohesion Policy is moderately reduced by around 5% to reflect the new reality of a Union at 27.

As reported by the Agence France-Presse (AFP), the departure of Britain, a net contributor, in 2019 leaves the bloc with what Juncker says is €15bn gap in its accounts. But countries including Denmark, Austria and the Netherlands are already gearing up to fight any demand for increased national contributions, although France and Germany have said they are ready to pay more.

Danish Prime Minister Lars Lokke Rasmussen tweeted that “a smaller EU should mean a smaller budget!” as the bloc will number 27 members after Brexit.

What is more, the EU’s eastern states are also likely to oppose both the cuts to cohesion funds overall, and also demands from southern nations like Spain and Italy that were hit by the economic crisis for some of those funds to be redirected. 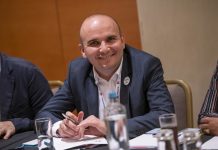