German Chancellor Angela Merkel on July 5 did not mince her words when she slammed Hungary’s immigration policy. She said Hungarian Prime Minister Viktor Orban is failing to respect “humanity”.

“The problem as I see it, and where the difference lies, is that we must always remember that we are talking about human beings,” Merkel told a joint news conference. “It is about human beings who come to us, and about Europe’s basic message. And that is humanity.”

As reported by the Agence France-Presse (AFP), this is the latest clash on European values.

Orban, a populist firebrand who has spearheaded a drive against the European asylum policies Merkel has fiercely defended, was making his first visit to Berlin in three years.

He agreed that he and Merkel had fundamentally different approaches to migration “and how to help people in a humanitarian way”.

Orban said Germany should be grateful for the fence Hungary had built on its borders with Serbia and Croatia, which he said was guarded “24 hours a day by 8,000 armed men”.

“Otherwise 4,000 to 5,000 refugees would be arriving in Germany per day. That is solidarity — solidarity that can be taken seriously,” he said.

Orban said the “only solution” was “shutting the borders and helping people” in their own countries, “not letting people in who bring bad things with them”.

In a separate report, the Reuters news agency described Orban as Merkel’s biggest adversary in migration policy. “If the help offered by Europe to migrants leads people in Africa and Asia to conclude that they can come, then they will come,” he said. “We have to be humane without creating a pull-factor, and the only way we know of doing that is closing the borders and taking help (to those countries), and not let in people who bring trouble.”

According to AFP, Merkel’s fateful decision in 2015 to leave the German border open to those fleeing Middle East conflict zones was prompted primarily by Orban’s refusal to offer them refuge and blocking of the so-called Balkan route into the EU.

At the time, Orban railed against Merkel’s “moral imperialism” while the chancellor, who grew up in communist East Germany, said she had seen enough walls in Europe for a lifetime. 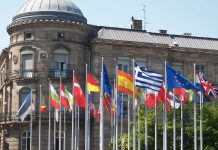