A Left manifesto for sustainable agriculture and forestry

The Left group in the European Parliament is today launching a manifesto for a fair and democratic CAP. The Common Agricultural Policy (CAP) has failed farmers and EU citizens, with one European farm disappearing every 3 minutes in the last decade alone.

The proposals elaborated by MEPs of the GUE/NGL group in the European Parliament come in response to the post-2020 CAP unveiled earlier this month. The Manifesto proposes concrete policies to realise:

In contrast, the Commission’s post-2020 CAP proposals continue the same old policies that have benefited mostly large agribusinesses like Monsanto, with dire costs to the environment, animals and public health. About 80 percent of the €55 billion/year CAP budget went to 20 percent of recipients, showing a huge imbalance in the system.

“Thirty years of CAP have taken a severe toll in our rural communities and our ecosystems. The CAP was disastrous for traditional family farms and impacted negatively, directly or indirectly, the lives of billions of people and billions of animals in and outside of Europe.”

“Therefore, GUE/NGL presents a Left manifesto for sustainable agriculture and forestry to show that the formulated goals are achievable, but only if we fundamentally change the direction of our policies.”

MEP Lidia Senra (independent, Galicia) called for a paradigm shift towards a fair and democratic CAP:

“The European Union must not use agriculture as a bargaining chip in trade liberalisation agreements. We must not gamble with food, our lives are not negotiable. The new CAP must incorporate a paradigm shift: placing people at the centre, instead of the market, banks and large distribution chains and agribusinesses.”

“The current CAP is unfair to peasants, the society and the environment. The post-2020 CAP should be an opportunity to realise that food does matter for our well-being and that our health is not a business,” Senra concluded. 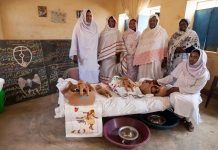 Artificial intelligence: MEPs want to ensure a fair and safe use for consumers

Artificial intelligence: MEPs want to ensure a fair and safe use...

“There are no winners or losers when we establish the EU...

EPP: Parliament will have the “last word” on the next long-term...

How to Really Reform the Democratic Primaries

The Voters Won’t Be Able to Hold Trump Accountable Either